Umami and MSG Get Some Love at FNCE 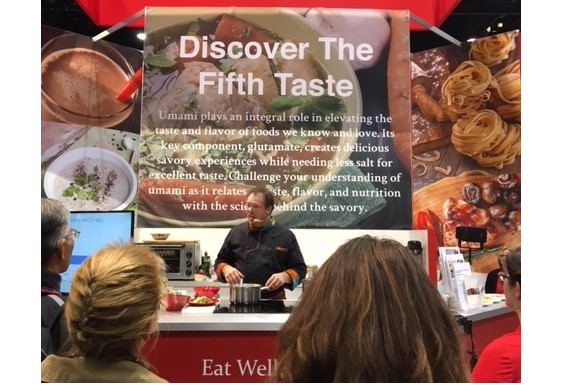 Only a few days ago, the Academy of Nutrition and Dietetics celebrated its 100th anniversary Food Nutrition Conference and Exhibition (FNCE) in Chicago, Illinois. Many members of the MSGdish team were there attending sessions, browsing the trade show floor and making new connections in the food world. MSGdish blogger and consultant Chef Chris Koetke was at FNCE too.

Chef Koetke attended FNCE with Ajinomoto, a global leader in the research and development of amino-acid based ingredients, including monosodium glutamate (MSG). The Ajinomoto exhibit featured MSG and umami experts, safety materials, and Chef Chris conducting cooking demonstrations and food sampling to showcase the benefits of umami.

Some of the MSGdish team members stopped by for a listen – and some delicious food.

All types of people were gathered in the audience to listen to Chef Koetke — nutrition students, registered dietitians, culinary experts and people who just love food. He began his presentation with an introduction to umami through the centuries, and then dove into how umami receptors were eventually discovered on human tongues long after the umami flavor was isolated from food sources. One thing Chef Koetke made sure to point out to the group is that although the umami/savory flavor can be found in a wide variety of foods: mushrooms, tomatoes, parmesan cheese, fish sauce, miso, etc., these foods come with flavors that you may or may not want in a recipe, such as bitterness or tanginess. So, he explained, the purest way to attain the umami flavor exclusively is with MSG.

Throughout and after his presentation, assistants handed out several food samples that set the crowd abuzz. One thing he had the crowd try was three types of beef broth: one had no seasonings, one had just salt seasoning and one had his favorite MSG/salt combo mix (1/3 parts MSG to 2/3 parts salt). Drinking the three differently flavored broths in succession allowed the audience to truly compare the flavor impact MSG provides. The audiences unanimously favored the third broth, demonstrating that MSG can be used effectively to reduce salt in recipes, with no loss in palatability. In another example, Chef Koetke’s assistants handed out two beef stews: one with just salt seasoning and one with an MSG/salt combination. The flavor difference was immediately noticeable. The MSG/salt combination beef stew tended to elicit a guttural “mmmm” from the tasters, accompanied by head-nodding.

After one-on-one discussions with Ajinomoto’s food scientists and experts, people who first approached the booth with skepticism walked away with a smile, a free sample of MSG and a new understanding of some of the foundations of food science. It was quite amazing to observe. “You just blew my mind,” one nutrition student said after learning that her organic chemistry professor was incorrect about how MSG reacted with gut microbes.

Chef Koetke also noted, “Umami is our recognizable taste for protein.” Surprisingly, many attendees were not yet aware that science has proven that umami is indeed our 5th taste (alongside sweet, sour, salty, and bitter). An oft-repeated phrase among many dietitians was simply, “Really?!” uttered in awe.

FNCE is a wonderful food experience. There’s so much to learn in only four days and way more exhibits than any one person can visit. But it’s always a good time. This year, in a room full of food and food experts, MSG and umami got some well-deserved love.