Asian Cuisine is Calling My Name. How About You? 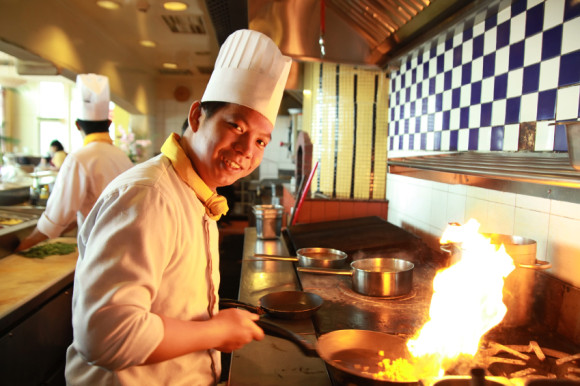 I have yet to meet a person who doesn’t like, or even love, Asian cuisine. Of all kinds. Whether it’s Chinese, Japanese, Korean or Vietnamese dishes (among others), foods from these regions of the world are packed with flavor that is strikingly different from any other.

The splendid news for those of us in the US? Restaurants serving these cuisines have become relatively mainstream. Long gone are the days of canned “chop suey” that my mother served our family one time only back in the 60s. Today there are said to be more than 40,000 Chinese restaurants in the U.S., and that’s not taking into account all of the Asian cuisine foodservice establishments.

So how did we come to develop an affinity for Asian cuisine? Upon perusing the Internet for an answer to my question, I found that “Asian food was introduced to the United States in the mid-1800’s when Chinese immigrants from Canton began settling in California. At that time the food was consumed primarily by the Chinese community. Chinese food became popular with young cosmopolitans in the 1920s because it was considered exotic. It wasn’t until after World War II that Asian cuisines (notably Chinese, Japanese and Polynesian) piqued the interest of mainstream America.”

And further, “while Chinese food was introduced to America in the mid-19th century, Vietnamese (Japanese, Thai, etc.) cuisine was generally unknown to mainstream American diners until the 1970s. Coincidentally, this period also marks the genesis of fusion cuisine, a convergence of fresh foods, exotic tastes and interesting textures.”

Can You Say Umami?

What makes these dishes oh-so delectable and oh-so delicious? Can you say UMAMI? It was over a century ago that Professor Kikunae Ikeda of Tokyo Imperial University unearthed the secret – a taste that he christened with the name “umami,” a taste the comes from the glutamate content of key ingredients. Ikeda made his discovery from a then-popular soup stock made from seaweed. Umami is now recognized internationally as the fifth taste, along with sweet, salty, bitter and sour. Umami comes from the Japanese word “umai”, which means savory or deliciousness. It is a unique taste deriving from glutamic acid or glutamates, common in meats, fish and cheese.

Although the classification of umami as a basic taste is a recent development, fermented fish products such as nam pla in Thailand and nuoc mum in Vietnam and other Southeast Asian countries have been traditionally used to impart the taste. Free glutamate levels in these fish products are as high as in parmesan cheese. People have actually been familiar with Umami for centuries without recognizing the term as stocks or bouillon of Europe, as tomato sauce and cheese in Italy and Greece, as fish sauce of ancient Rome and southeastern Asian countries, as well as soy sauce in Asia.

But enough of the history. My stomach is calling to me. What will I order? Beef and broccoli? Cashew chicken? Vegetable tempura? Cold soba noodles? The possibilities are endless. Good thing there are seven days in a week!