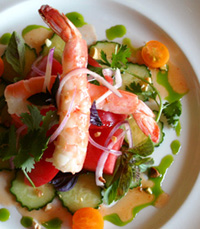 This savory (and umami rich!) recipe comes from Chef Hiro Sone, the 2003 winner of the James Beard Foundation’s award for Best Chef in California and the first Japanese chef to have two restaurants with Michelin stars. Chef Sone has created this lively summer salad, which brings together each of the five basic tastes to give a flavor both complex and revitalizing. Umami-rich tomatoes, dried shrimp and peanuts are brought together with sweet watermelon and salty fish sauce as well as lime juice for refreshing sourness and a touch of cucumber rind for a bitter flavor. The sublime combination of the tomatoes and the fish sauce gives the dish an unsurpassable richness of flavor.

For the ginger shrimp

Recipe and photo courtesy of Umamiinfo.com