Good Tasting Food With MSG Can Translate to Weight Loss 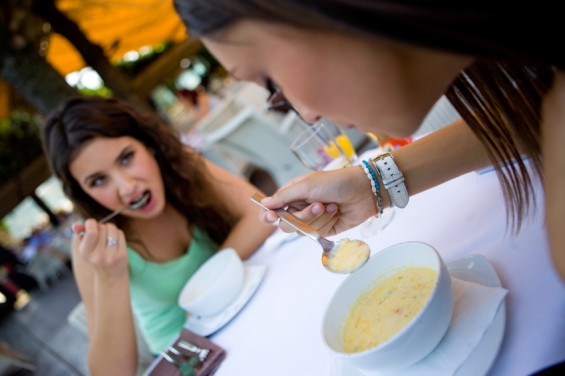 OK. Let’s see a (hypothetical) raise of hands if you have ever eaten a meal and afterwards thought, “Why did I just eat that? It wasn’t very good and I’m sure not satisfied.” This dissatisfaction is even further amplified if you’re trying to lose weight. It’s during those times of food “blah-dom” when dieters go in search of more-and-different foods, either immediately or shortly thereafter finishing a dull meal. Needless to say, such a seek-and-eat mission ultimately leads to more calories consumed, whether you’re counting them or not.

Of course, sometimes when mediocre-tasting food is all that’s available, it’s easy to understand why one would eat it. But that certainly isn’t the optimal situation, now is it?!

After eating, we want to feel as though we did both our bodies and taste buds proud! Sure, a dozen stalks of celery might make you feel full, but satisfied? – I think not.

That brings me to the subject of this blog, the point of which may come as a surprise to those who may have missed the headlines it prompted. A recent scientific research study published in the well-respected American Journal of Clinical Nutrition found that the popular umami taste – which can be imparted by monosodium glutamate (MSG) – can actually make you feel fuller and more satisfied, thus having the potential to curb your appetite and reduce total amount of calories consumed.

Published late this summer, the results of this research study were recapped for consumers in publications like TIME magazine. Their story “Eat Umami: Eat Less” provided an excellent round-up of the research. “If you’re feeling unsatisfied after a meal, perhaps it wasn’t flavorful enough. A new study suggests that the taste umami may actually make you feel more full and satisfied,” according to TIME.

This relatively trendy (but not new!) umami taste can easily be added to certain (non-sweet) foods with just a dash of MSG — and that is exactly what the researchers did to reach the study’s findings. In short, two groups of subjects ate an identical breakfast followed later by a broth developed for the purposes of this research. The test group consumed a protein-based broth with added MSG, which upped its umami quotient. The control group had the same broth, but without the MSG.

Come lunchtime, the proof was in the pudding (or in this case, the broth!). All of the research participants were allowed to eat as much lunch food as they wanted (called ad libitum). So they dug in.

And guess what? Umami magic! The test group (that consumed the broth enhanced with MSG) ate less food at lunch. Moreover, even though they ate less, they stated they were as satisfied as those who ate larger lunches.

Granted, we all know that it takes a combination of eating fewer calories and increasing exercise to lose weight; and there is no magic to just eating fewer calories if you want to keep the weight off. However, this research demonstrates one very simple step may help you reach your desired outcomes, whether it is down that path to shedding a few extra pounds or even in helping to maintain a healthy weight.

To learn more about how a small amount of MSG can go a long way in improving taste, read “8 Tips for Using MSG in Cooking and in Recipes.”

And for more information about why glutamate seasoning (MSG) is the simplest, purest way to add umami to food, be sure to read 10 Things You Should Know about MSG, courtesy of MSGfacts.com.